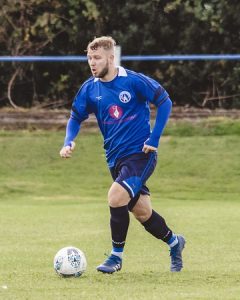 After falling to defeat away at Wednesfield FC, defender Aaron Weston gives his full-time reaction on the game.

Weston has been a staple in Ward’s defence since joining the Meadowmen and today’s game was the biggest loss he’s suffered yet, with the club.

Weston understands that to win games, you have got to maintain the tempo during games.

“We started very brightly and we looked like we were going to put the previous game behind us and move on but it wasn’t to be as more players become unavailable to play. Take no credit away from Wednesfield who were effective in what they do. They managed to catch us on the break and made their opportunities count, I think there’s moments in games where if the opposition takes their chance, they will win the game.

“We suffered it against Shifnal and now again, Wednesfield were the more clinical side. It’s tough to take today but we need to make sure we keep going and iron out these costly mistakes that end up with the opposition scoring.”

“We’ve got a great bunch of lads here who are all technically good footballers. We just need to get our head down and work harder for each other and try and put things right next week in the vase. We all know what this means to Ward and the staff that he’s brought in with him. I think a cup run is sometimes what every side needs, at all levels. We need to apply ourselves correctly and with that I hope that our quality will show because some of the results so far haven’t fairly displayed the way we’ve played.”

“It really hasn’t helped us, we’ve struggled to get the same back four for 2 games in a row so it’s hard to find a system at the back that works but I’m sure we will find our feet and we will start to string some positive results together.

“No club wants their injury list to be expanding all the time, it puts you in a bad position and we don’t want that. It’s important that we continue to dig in and just try and work on getting our injured lads back to full fitness so we can start to win games with a more stable starting XI.

“It’s been an incredibly tough start to life in the league this campaign but we have to look forward and we have to do that together.”

This website uses cookies to improve your experience while you navigate through the website. Out of these, the cookies that are categorized as necessary are stored on your browser as they are essential for the working of basic functionalities of the website. We also use third-party cookies that help us analyze and understand how you use this website. These cookies will be stored in your browser only with your consent. You also have the option to opt-out of these cookies. But opting out of some of these cookies may affect your browsing experience.
Necessary Always Enabled
Necessary cookies are absolutely essential for the website to function properly. This category only includes cookies that ensures basic functionalities and security features of the website. These cookies do not store any personal information.
Non-necessary
Any cookies that may not be particularly necessary for the website to function and is used specifically to collect user personal data via analytics, ads, other embedded contents are termed as non-necessary cookies. It is mandatory to procure user consent prior to running these cookies on your website.
SAVE & ACCEPT